I have been Diving for little over a year now, and have had the chance to see some pretty amazing things. If there is one thing I have learned, it is that no two dive sites are alike. Each has its own unique marine life, coral, and experience. So when I learned my fiance had purchased me Disney’s DiveQuest tour for my birthday, I was ecstatic.

DiveQuest is a three hour tour experience for certified SCUBA divers consisting of a behind the scenes tour of the massive infrastructure supporting ‘The Living Seas’ and a 40 minute immersive dive experience. During your plunge into the Caribbean Coral Reef tank you will swim with over 6000 sea creatures and be able to interact with your family through the 56 giant windows. 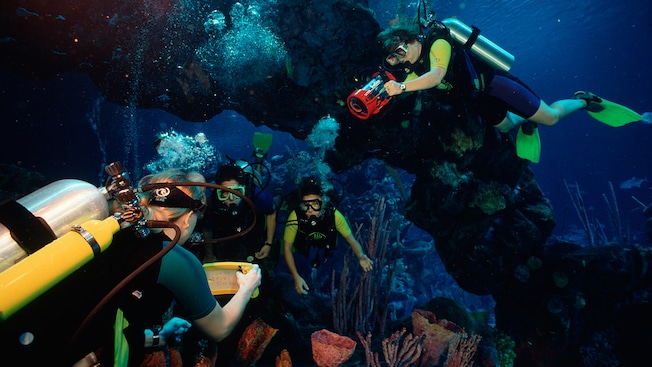 Our tour group met just outside Epcot’s guest relations in front of the park at around 4:30 PM. They offer two diving sessions on most days–the first at this time, and a second later session at 5:30 PM. We were greeted by one of the coordinators, Eric, and his friendly staff of divers. While waiting for the rest of the tour group to arrive, they gave us the true Disney hospitality by personally talking to each of us and joking around with the staff.

When everyone had arrived, they answered some quick questions and gave information to our families about what time our dive was, and where the best place to watch was. One of the first things their team did was to get our certification information and determine what size equipment we needed. They had this process down to a science, and completed it in a matter of a few minutes. I simply told them what size I typically wear and they adjusted it to the best fit.

After gathering the information, he took us on a tour of the Epcot Living Seas facility. It was amazing to see the immense size of their operation. With how much attention and care Disney puts into hiding the backstage areas, you would have never guessed it was there. The tour brought us past the filtration outside, through the food preparation station, and past the backstage holding tanks for the marine life. At each place, we spent several minutes learning about the operations that go on there and what day to day work is like for the employees.

With the tour complete, our group signed paperwork, completed a safety briefing, and headed down to the locker rooms to get our equipment on. When we walked in, there were lockers with our names on it. To our surprise, during the tour they gathered all of our wetsuit gear and placed it in our lockers so that we could change quickly. There was sufficient space for everyone inside the locker room with private changing stalls, showers, and bathrooms. After we changed we put our clothes and valuables inside our lockers, we were able to lock it up.

After wrestling our way into our wetsuits, we headed up stairs to the floor that sits above the tank. We walked through a door and across a bridge into the main room of the tank with the diving platform. My first impression when I walked into the room was of pure awe. It’s hard to see from the observation area in the Living Seas, but the tank is massive. We were told the tank is so large that the diameter of the Epcot globe can fit inside while still having room to drive a bus around it.

When we got to the dive platform, our dive equipment was ready to go. They had all the correct sized equipment turned on and sitting on the edge ready to be put on. The platform itself is well designed for easy entry and exit from the water, making putting on equipment a breeze. Our dive master, Scott, gave us our final briefing on the dive with all the DOs and DONTs and off into the water we went.

The descent into the tank was a piece of cake. There is no current (obviously), and a mooring ball to guide yourself to the bottom which only sits 20 feet below the surface. In the tank it is virtually impossible to get lost or lose the dive group because the visibility is nearly unlimited. After grouping up underwater, we did a quick tour through the tank to see all the different areas. Even inside the tank Disney paid careful attention to details. The coral reefs were realistic looking and a rock layer on the bottom of the tank made you think that you were in the ocean.

After this aquatic tour was complete, we were given full permission to explore the whole tank with only a few restrictions. Naturally, my first stop was to see the one thing I was excited the most about: people. I swam up to the observation area where I quickly found my friends and family. They could see me as clear as I could see them and we were able to snap several pictures. Soon a camera man with a underwater camera swam over and took video of me interacting with them.

Photo with my Fiance on the other side of the tank

After visiting with them, I swam around the other parts of the tank visiting guests at the Coral Reef restaurant at the living seas. Kids came up to me to take pictures and to play a quick game of rock paper scissors. This is perhaps the greatest thrill of this tour–diving in the tank, interacting with guests, and feeling like a honorary Disney cast member.

After spending a good chunk of time interacting with guests, I swam to go see all the marine animals. They have several types of fish, a sea turtle, and even sharks! In a special area we could sit at the bottom of the tank as sharks swam less than a foot away from us. I was terrified and excited all at the same time despite them assuring us that these sharks were completely calm.

Toward the end of the dive, I captured some more pictures with friends and surfaced a few times to clean the salt water from my regulator mouthpiece. Having such a shallow tank makes this possible. During the dive they encouraged us to surface if we need to, and not to worry about air consumption. During the 45 minutes, you are entitled to as many tank changes as you could possibly need. For myself, doing average air consumption, I found that no tank changes were necessary. Swimming around in the tank

Before I knew it, the dive was over and we surfaced out of the tank. We dropped off our gear with the help of the dive team and headed back to the locker room. We were handed our locker keys upon entering so we could retrieve our clothes and valuables. Inside, we took full advantage of the showers which come complete with towels, body wash, and shampoo. It was so organized there that they even had bins for the used wetsuits and towels.

Then as a last item, they signed our diving logbooks and played for us the video they had recorded earlier. To my delight, despite having 15 people in the group, there was at least three shots of me diving! I purchased the DVD and entered the park to enjoy the rest of the afternoon at Epcot. No park admission was required for the diver (but it is if your family wants to watch you dive). My recommendation if you don’t have a park ticket–do the earlier tour to enjoy more time at Epcot after your dive.

The DiveQuest tour at Epcot is a must do for any diver! It is an easy dive that delivers a experience like no other, since you get to interact with park guests as they watch you dive. Unlike normal dives, there is no current, no waves, unlimited visibility, and guaranteed sightings of marine life.

Some things to note before you go:

– You are only allowed to bring your goggles and swimsuit

– Park admission IS NOT REQUIRED

I have been a Florida native for four years now and enjoying trying something new in Orlando every weekend! I am engaged to the love of my life and we our now planning our Dream Disney Wedding!